Laoag is becoming known as a place to visit during winter migration season to see a lot of migrant starlings, ducks, and other birds. Laoag-based WBCP member Richard Ruiz has been very diligent about monitoring different areas around Laoag for these migrant birds and reporting his findings to the rest of the club. One interesting site that Richard has been monitoring are some privately-owned fish ponds in Baranggay Gabu Sur. Richard had reported a lot of interesting birds from this area including Greater Cormorants, Spot-billed Ducks, Eurasian Wigeons, other rare migrants, and a lot of Philippine ducks.

We arrived in Laoag at noon on December 27th. We met up with Richard, then headed straight for Baranggay Gabu Sur. We were quite pleased and excited by the site! It is a sprawling property by the sea. There were four ponds with ducks. One big pond had at least 250 Philippine Ducks. The three other ponds had less ducks, but we were so excited we did not do a proper count. Conservatively there were at the very least 300 Philippine ducks, 1 Eurasian Wigeon, 2 Common Teals, 7 Tufted Ducks, 1 Northern Pintail and a lifer for us a Common Pochard. We were very happy for Richard to have such a great birding site so close to his home. He said he was happy that the owners of the property allowed the birds to feed and rest there undisturbed.

The next day, we returned to Baranggay Gabu Sur at 8:00am with WBCP member Felix S who hadn't seen the ponds yet. We had told him about all the birds we had seen the previous day and he was excited at the prospect of seeing some interesting birds.

But when we arrived there were no ducks. Zero.

We then came across a lone shot gun shell. We did not see this shell the day before and its bright blue color stood out against the dry grass. Oh, a hunter must have been here and he seemed to have shot a duck or two we thought. Then we came across a few more empty shotgun casings. Then even more. We collected them all an eventually counted an astounding 110 shells. No wonder there were no more ducks.

We can assume that multiple hunters took part in this massacre. Despite Republic Act 9147 which bans hunting wildlife, this criminal act hunting is still going on. This is not the first time we have encountered hunting in the wild, but this must rank as the worst. Why fire 110 times? We imagine they just wanted to shoot anything that moved. It was shocking and upsetting. We spent the rest of the morning looking for shells and clues. We suspect that there were several shooters because of the way the shells were scattered around the ponds. They probably ringed the ponds and then started shooting the ducks at the same time before they could all fly away. They probably arrived early and positioned themselves among the floating or even sleeping ducks. After the initial coordinated gun burst, they must have moved around shooting the flying ducks because the shells were scattered with no more than 6 in one spot. We don't really know what happened but can only assume that at least 110 rounds were shot into the ducks. It would be safe to conclude that a lot of them were killed that morning.

The ponds were empty that morning. Then a lone duck, a female Northern Shoveler landed in a pond. It was scared and skittish. When it saw us it flew off. We had counted 6 Northern Shovelers the previous day. As we were leaving we saw 6 Philippine ducks flying in the air. On one hand it was nice to see some survived the massacre. But on the other hand it made us think that when other ducks come back to the pond the hunters are going to shoot them again.
Read More 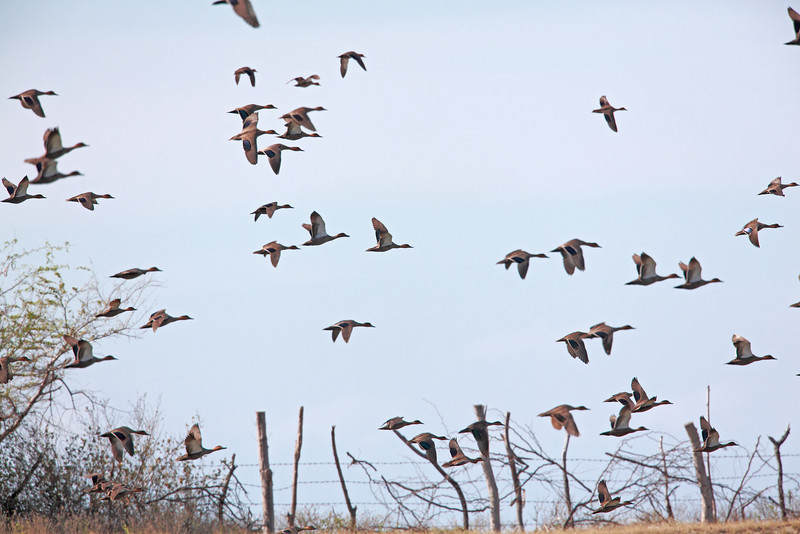 Hundreds of Philippine ducks were in the site.